“I would never work for that President!”

I hope this is not a phrase we hear once the election is done.

There has been much discussion lately amongst national security, foreign policy, and economic specialists about the Presidential candidates they would never work for because they are unqualified etc.  They aren’t the only ones getting especially politically active this year given the rise of very unorthodox candidates and the large number of citizens (left, right, and center) joining the political process for the first time that want serious change in their federal government.  This morning, just 24 hours after I wrote my first draft of this post, I saw this on War on the Rocks.

People are saying some crazy stuff on the campaign trail–this is actually nothing new.  I wish we had Facebook posts from 1859 to read the rhetoric prior to the Civil War in comparison.  The larger media organizations trying to retain relevance in the new social media world are asking gotcha questions to and spreading wild stories about candidates they don’t like–again nothing new.  You can read some of the press statements and opinions from past elections—its eye-opening to watch history repeat.

What is new is the number of people currently serving in government or who might be asked to join the next administration taking some very hard positions for or against certain candidates or their ideas.  Clearly the days of silent apolitical government servants are fading.  Everyone can now publish on Facebook, twitter, Instagram…you name it there is a publication outlet for everyone.  This used to be near impossible with newspapers and magazines controlling the number and type of writers based on their ideology.

OK you! The person who just said “I am not being political!” …yes you are.

Even if you don’t talk about specific candidates everyone “likes” or “shares” ideas and concepts that are important to them and this aligns you with political party campaign platforms–so yes we can all see where you generally reside politically.  Others have stickers, bags, shirts etc that they wear outside of work—but in the presence of co-workers.  Guess what?  We can tell who you support and who you don’t like.  Its America though, and in a democracy you have a right to support your ideas and candidates. (although if you are earning a government paycheck you might want to periodically check your agency’s rules on campaigning.)

Is this new-found political voice for federal government employees a bad thing?

(Government Employee: defined as anyone getting a federal paycheck–military and civilian)

I don’t think so, but free speech has its limits when you are in government service or if you may want to go back to it after leaving.  We are all now published writers, even if you don’t think you have a large audience because you tightly control your privacy settings.  Posting on Facebook or Twitter isn’t far from writing an OpEd in the newspaper.

Back to the vows to “only work for people you like” or to “leave the country if President X is elected.”  Life isn’t fair.  People will win elections you don’t like.  Americans are not quitters though and if you swear to uphold the constitution then keep your oath and help out whoever leads our country.  You can have an opinion and offer alternative ideas about how to achieve success as a nation but I urge you not to abandon this great institution called the United States of America.

How does this pertain to the strategically minded specialists that serve the American people in the U.S. Government?  If you don’t get your way in an election is it patriotic to walk away from your profession and leave a new president with a very limited pool of “experts” to choose from to fill her/his administration?  In my opinion you work hard for every President, whether you personally like them or not.

Let me give you some examples from my 23 years in government service in defense, diplomacy, and intelligence circles so we can better answer these questions.

As a young military officer I was assigned to U.S. Embassy Kabul.  It was very small but the most vital Embassy on the planet as we began the war in Afghanistan.  I had voted 2 years earlier for then-President Bush.  As a military officer I was trained and expected to work as hard as possible for every Commander in Chief (he was my third) regardless of how I voted as citizen.  I was stunned to hear the diplomats and other non-military members in Kabul talking poorly about our President in some very public forums.  I did not engage them as I was unsure of how I would even start to explain the expectation, that as American’s abroad, we may not like our President but we need to carry out his policy and not disparage him in front of non-Americans.  This went beyond remarks about Bush policy ideas into personal insults about his intelligence and other topics as the Invasion of Iraq had begun.  I have no problem (as is the American norm) for people outside of government to publicly critique U.S. Government leaders but hearing people inside the government take up that role was surprising to a Soldier.  Then I remembered, I had seen people bad-mouth President Clinton years earlier for being a Vietnam War draft-dodger.  I had engaged in that talk myself as a young paratrooper but that didn’t mean making those statements was the right thing to do even if it was true.  This taught me a lesson about supporting a President despite his flaws.

As a military instructor a few years later during one of my counseling sessions with a student he told me I was getting into the political lane when I seemed to defend the Presidents policy in Iraq during a Q&A.  No matter my views on Iraq I should not have looked political while serving in the government.  I took that to heart, as just as dangerous as I found it for civilians in the Embassy to bad mouth the Commander in Chief, it made equal sense that members of the government should not be seen as political cheerleaders for a sitting President.  Finding that happy middle ground is difficult but important to ensure we are truly serving the American people and not just the President.

Move forward to President Obama’s first election win.  I voted for McCain because I wanted more leadership experience in my President and did not like his divisive language on the campaign trail where he repeatedly called Republicans “the enemy” (which he later admitted was not good for America).  Obama won the election and was my new Commander in Chief and that is where my public views on him needed to end.  The first thing I did was to send him a letter from California that explained, in detail, my successful experience mentoring at-risk-youth in schools near my military posts.  I wanted to help him to fix a big cultural problem in our country.  The White House sent me a letter back thanking me for the idea and in the ultimate thank you borrowed from my draft nationwide mentoring concept turning it into the My Brother’s Keeper program years later. 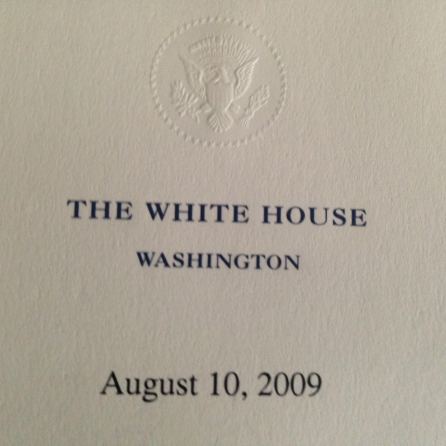 When the president made clear his intention to focus on getting the Afghan war on track I volunteered to deploy for 2-3 years to help (for my family’s sake I am glad the Army told me to leave after a year).  I was given a task to help create a program that would achieve one of the president’s major policy goals for the Afghan war.  I traveled the globe aiding a great General and Diplomat to explain that policy and seek international support for that policy.  He and I defended the President to many people across the globe (especially in DC) who strongly stood against his policy.  This caused long term Afghan friends of mine in Kabul to question my intelligence and loyalty to innocent Afghan civilians.  I got sincere input from military friends that made me feel I was abandoning front-line Soldiers.  But my job was to fully support the President’s policy, regardless of who I voted for in any election, or the feelings of my trusted friends.

President Obama wasn’t trying to do anything wrong with this policy so in less than 10 months the policy was enacted.   Along the way our team leader got a personal thank you for our team and a handshake from President Obama  while we were at the White House.

Giving 100% to my team and mission was tough and I barely held my marriage together during that tour as I initially deployed on 2-weeks notice after my wife had been diagnosed with a mass in her brain.  I made her feel abandoned.  In the end I also spent $2,000 out of my own pocket to serve in a combat zone for a President I didn’t vote for.  Lesson: do your job and worry about the costs later…it helps if you have a forgiving wife.

Why do I share my very personal story today? Not because I did anything special, as tens of thousands of Americans gave much more in service to their country and probably never thought about political elections.  If you came to my retirement ceremony you have heard some of these stories and you know why I share this—No matter who gets elected to lead our nation this November the best qualified people must be available to advise him/her and carry out their new policies.

Is there a perfect candidate?  No.  I think Trump is a wild-card who often speaks without thinking ; Hillary has a hard time with the truth and has a leadership style I saw up close and despise; Bernie has horrible economic ideas; and Rubio and Cruz have some ideas I fully disagree with; but if asked (don’t worry they won’t), I would work for any one of them because they would be the President of all Americans.

So enjoy the political race.  I am excited to see so many people getting involved and having their say.  Create and share these hilarious memes and jokes on the internet…some of this is comedy gold.  Don’t worry, its campaign season, everyone sounds hypocritical and schizophrenic.  No one is perfect and consistent in their public comments because there will never be one “perfect candidate” that shares all your beliefs.

BUT do not quit your day job.  If you are in a profession that is required by any President at any time you should do your best to say yes to any job offer because America deserves great people in Washington DC.  I thought long and hard about what I would do if asked to serve a President I don’t like this time around (as I have a choice now as a citizen).  I would choose to serve again and not let my political feelings get in the way of my duty as a citizen to help our country.

Your opinion might be different but at least think about the ideas I have presented.  America works best when we work together but never be afraid to use your free speech rights to critique our leadership—they work for us, the citizens.  While its a given that no one in government employ should ever carry out any illegal directives from a President…if you are outside of government you will never be able to advise your leaders against doing something stupid or to expose them if they go full-Nixonian.