One of our most qualified and capable presidents has joined in his wife and daughter in heaven.

The final president we were gifted from the greatest generation is gone, but his mark remains on this human project and upon me and so many others who were lucky enough to serve under him.

He came from New England like me but the similarities of home life end there. His home had servants while our Vermont home was built by hand by my dad, uncle, and grandfather. He had a beach home compound in Maine and we slept in a tent at the Dixon Campground nearby. My family also couldn’t afford a 2nd middle name for me.

But for all our differences, I looked up to him as a high school student and a young infantry paratrooper.

He showed me first that you should take many jobs and do them all well in life. He served America in uniform, as a business leader and job creator, as a diplomat, in the intelligence community, as a legislator, and of course as a Vice President and President. That is a well rounded career of service to his fellow man.

I didn’t know it at the time but looking back I tried to model my leadership on the man I now consider the finest president I served.

President Bush was humble and intelligent. At least I tried to get the humble right.

His humility extended to America’s humility after the Soviet Union voted itself out of existence ending the Cold War. The communist nemesis of my childhood had gone out of business following a failed Marxist socialist/communist economic and social model.

But Bush was wise enough to take counsel from many corners and devise a US policy that would keep the ex Soviets from failing so hard they destroyed the world in their wake. He helped welcome old enemies into the New World Order and steered that order towards peace and diplomatic solutions not chaos and violence.

The world may never come to recognize how important that moment was to the human experiment.

But Bush was strong not just in diplomacy. He knew what right and wrong was and didn’t like to see the innocent attacked by evil men, nor his own people suffer in the midst of catastrophe.

He quickly acted with all the instruments of national power to remove a dictator and criminal in Panama and restore democratic rule. He rallied the world to remove a dictator that tried to steal a country (Kuwait) and put Hussein back in a box. For my first deployment he rapidly launched American Paratroopers into South Florida to save and protect the lives of his citizens after Hurricane Andrew flattened the sunshine’s state’s sunniest spot.

Bush found ways to inject comedy and laughter into life. Maybe after you have a near death experience you realize that taking life too seriously is not healthy nor helpful. My favorite leaders always knew when to let a smile or laugh ease tensions.

Bush had a personal touch that made people want to be kind to him and feel safe in communicating with him. That is important in life, especially if you want people to tell you difficult truths. He passed on to many of us the value of correspondence and the belief that all the people you run into every day are special, and should be treated with kindness.

My friend relayed a story about the day he saw the president out jogging in a secret service gaggle in DC. My buddy, a Coast Guard Officer, decided to run up and try to say hi. The president chatted happily as they jogged for a moment. That day stuck in his head and years later as a budding artist when he drew a sketch of Bush the elder, he asked what I thought of it. I suggested he send it to him with a note about their jog in DC. He did and a retired President was thankful. 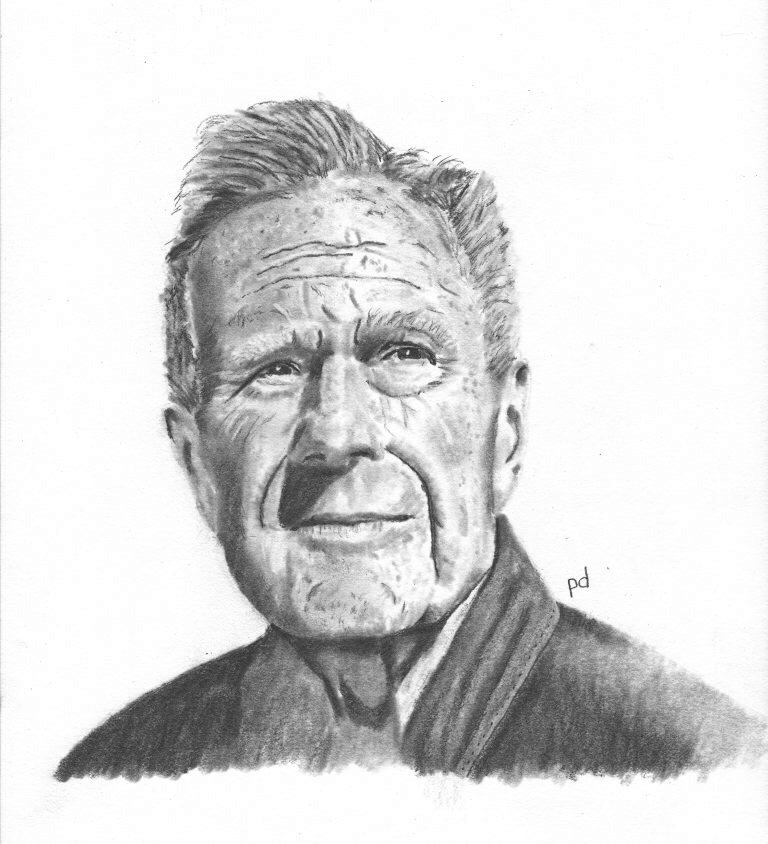 I think we should all be thankful that we got to spend part of our life with a guy who is probably pretty popular in heaven this morning. God will quickly realize that a kind, humble, compassionate, brave, and good human has arrived. Likely a veteran in heaven just bought him his first of many free drinks in the afterlife.

Thanks for the inspiration to be a better man.

Keep your feet and knees together Airborne.

41st President of the United States of America

One thought on “Saluting my First Commander in Chief”